Capillary electrophoresis is the separation of ions (charged species) in fluid inside a thin tube (capillary). This separation is done by applying an electric field across a channel. The electric field is applied at the entrance and exit of the capillary. The electric field causes ions to move towards one of the electrodes. A positive ion will move towards the negative electrode and the negative ion will move towards the positive electrode. The ions will migrate from the entrance to the exit of the capillary and vice versa. Each ions has a certain speed in the electric field which is different for each type of ion. The different speed results in separation of different types of ions from each other. In time it is possible to separate the ions during their migration through the channel and to detect the separated ions at the end of the capillary by conductivity detection. Based on an algorithm and the conductivity detection the type and concentration of the ions can be determined.

A measurement typically consists of five steps, applying, injecting, separating, detecting and calculating. The five steps of the measurement process are explained in more detail below.

Step 1 is to apply a blood drop to the sample channel.

Step 2 is the activation of an electric field. This causes the positive particles from the applied blood to be sucked into the canal. 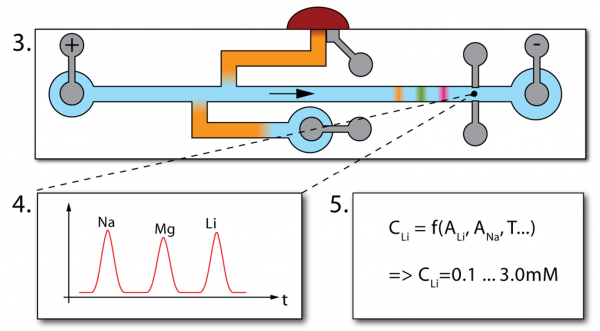 By placing the electric field over the separation channel in step 3, the ions are drawn to the end of the separation channel. Due to the different velocities of the ions in the applied field, the different types of ions will diverge during their journey through the channel, resulting in different zones with each different types of ions. The zones are analysed by conductivity detection at the end of the channel. The conductivity detection measures the differences between the different zones. Step 4, as the velocities of each different ion is known, it is known which type of ion belongs to the various peaks in the measurement signal.

In step 5, the concentration of the specific substances is calculated and displayed on the screen of the device.

More information?
Contact Via the contact button you can ask us a question or request an interview. You can read more scientific articals in our documentation section.